In a book entitled, The Better Angels of our Nature, Harvard Professor Pangloss (Steven Pinker) says we are living in a more humane world today (see his article “Violence Vanquished“).

Well, I beg to differ.  He argues that violent death is less frequent than in previous periods in human history, and that the number of people who die peaceably in their sleep all over the world is at a higher percentage than ever before. True, because he’s only counting those who manage to make it out of their mothers’ wombs without first suffering a violent genocidal demise.  That’s only 4 out of 5 people.  So stay out of your mother’s womb.  It is a game of Russian Roulette (I prefer my chances with six shooter).  But also, we are now on the verge of war breaking out all over the globe (starting with Egypt, Libya, Yemen, etc.) caused by economic instability.  Apparently, the Christian Century published similar drivel, just before the outbreak of World War I.  Today, with global instability caused by monetary policy, the doctrine of Total Depravity is gaining traction. 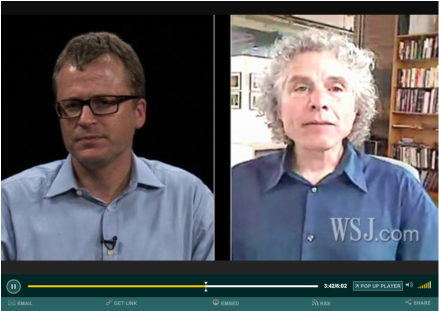