[NB:  There is a discussion of this post at:  City of God]

In one matter Luke praises a standard even more rigorous than that actually taught by Jesus, for Luke is evidently delighted to tell of the extreme communism practised by the first believers.

These passages in Acts represent the influence of the Holy Spirit on the Christian community, causing them to share in a counter-cultural manner.  But it is not communism by a long shot.  Here I mean communism in the sense of the relinquishment of private property, as some have understood Luke’s statement (Acts 2.44-45; RSV): “And all who believed were together and had all things in common; and they sold their possessions and goods and distributed them to all, as any had need.”  Yet it would do violence to the text to say that everyone sold everything they had to provide for the poor: Luke does not say that.  First of all, the pronoun “their” is not in the Greek.  Secondly, it would be justified to translate this sentence,  “They sold possessions and goods” (καὶ τὰ κτήματα καὶ τὰς ὑπάρξεις ἐπίπρασκον), the distinction between possessions and goods, is likely that one is immovable property (real estate) and the other is personal possessions (so F.F. Bruce).  Thus, I consider the usage of the article to be generic (see Dan Wallace, Greek Grammar Beyond the Basics, 227) not possessive.

There was not a needy person among them, for as many as were possessors of lands or houses sold them, and brought the proceeds of what was sold and laid it at the apostles’ feet; and distribution was made to each as any had need.

Now in order for Easton’s “extreme communism” to apply, we must again assume that everyone sold all their lands and houses.  Yet we find strong evidence that the Christians did not do this.  To begin with, the practice of Christians of “breaking bread” (cf. Acts 2.42) took place in private homes. So when Paul ravaged the church, he went from house to house to attack the Christians and to haul them off for punishment (Acts 8.3).  So whose houses were they meeting in?  It would appear to me that some of the Christians who owned houses hadn’t sold them.  Two such people are explicitly mentioned in Acts.  Mary the mother of John Mark owned a house in Jerusalem, where the believers met to pray for the imprisoned Peter (Acts 12.12).  And certain Mnason of Cyprus owned a house where Paul and his entire entourage were able to lodge while in Jerusalem–he is described as an early disciple (Acts 21.16), and was perhaps converted on the day of Pentecost along with many other Diaspora Jews, but for reasons untold he was able to stay in Jerusalem when the other Hellenistic Jewish Christians fled during the persecution of Stephen (Acts 7.1-8.4).  Philip, one of the first deacons chosen in Acts 6, was also an early disciple; he had a house in Caesarea that he didn’t sell, and there he lived with his four virgin daughters who prophesied (Acts 21.8).  Barnabas, the one person explicitly named who generously sold a field and was called “the son of encouragment”, probably retained some other holdings in Cyprus, for he returned there with his cousin John Mark after his dispute with Paul (see Acts 4.36-37; 15.39).  He sold a field but not likely everything he owned.  Still, this was a fantastic act of generosity.  Finally, the early church wasn’t practising communism, for in Acts 5.1-11, Peter says to Ananias and Saphira that the property, of which they allegedly brought the full sale price, belonged to them and even the proceeds of the sale belonged to them, and they could have simply given a part.  But instead they chose to give only a part and to pretend that it was the full amount.  Thus, Peter affirmed their right to private property.

Now let us turn to the analysis of Acts 4.34.  If we are to accept the RSV translation, then we would most likely diagram the sentence as follows: 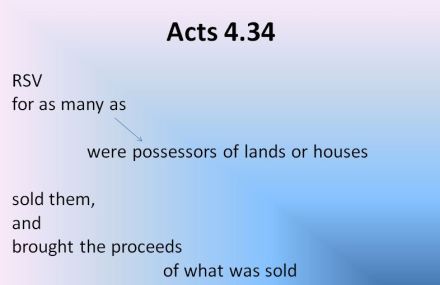 The term, “for as many as”, is used in constructions like this:  “as many as did the one thing, did the other thing”.  So the suggestion of the RSV translation is that everyone who was an owner of a field or a house, sold them and brought the proceeds to the apostles, i.e., extreme communism.  There doesn’t seem to be much wiggle room.  However, as we have seen, Luke explicitly mentions people who still owned houses.  How do we reconcile this?

There is a point of grammar in the original Greek that doesn’t come out in the RSV:   ὅσοι γὰρ κτήτορες χωρίων ἢ οἰκιῶν ὑπῆρχον, πωλοῦντες ἔφερον τὰς τιμὰς τῶν πιπρασκομένων, literally, “For as many as were owners of lands or houses, selling, brought the prices of the things that were sold”.  The participle πωλοῦντες dangles between the imperfect verbs ὑπῆρχον and ἔφερον, the comma being an editorial addition to the text (UBS4).  If we were however to translate using the second option, that the participle goes with ὑπῆρχον instead of with ἔφερον, this would require moving the comma to after πωλοῦντες instead of after ὑπῆρχον.  We then diagram the sentence as follows:

Now the sentence makes more sense in the overall context of Luke’s Acts:  As many as sold the lands or houses that belonged to them, brought the proceeds to the apostles.  The text thus should not be forced to say that all the Christians sold everything they had, but that those who did were generous and brought the gifts to the apostles’ feet for administration.  The principle of charity towards the author (as Andrew has suggested to me) would play a role here:  the author, Luke, would not seek to write incoherently, suggesting at the same time that all the Christians sold their property but some retained their property.  The principle of charity would suggest that we interpret Acts 4.34, if possible, in a manner which does not create this contradiction.  Thus, I conclude that those who sold their property did so to provide for the community.  This is counter-cultural generosity.  But others did not sell their houses but rather made them available for the use of the community while maintaining ownership.  This is not communism.

One thought on “Extreme communism or just counter-cultural generosity? The case of Acts 4.34 and a dangling participle”