A response to those who still believe in anthropogenic global warming at City of God.  This post responds to the question of how much man’s contribution is to total greenhouse gases in the atmosphere and whether human reductions in greenhouse gas emission would have any effect on the greenhouse effect.

Dr. Timothy Ball, whose PhD is in the field of climatology and is a professor emeritus in the field, makes this observation:

FC: In layman’s language, can you describe the role played by water vapour in determining atmospheric conditions?

TB: Water vapour is the most important greenhouse gas. This is part of the difficulty with the public and the media in understanding that 95% of greenhouse gases are water vapour. The public understand it, in that if you get a fall evening or spring evening and the sky is clear the heat will escape and the temperature will drop and you get frost. If there is a cloud cover, the heat is trapped by water vapour as a greenhouse gas and the temperature stays quite warm. If you go to In Salah in southern Algeria, they recorded at one point a daytime or noon high of 52 degrees Celsius – by midnight that night it was -3.6 degree Celsius. That’s a 56-degree drop in temperature in about 12 hours. That was caused because there is no, or very little, water vapour in the atmosphere and it is a demonstration of water vapour as the most important greenhouse gas.

If it is green house gasses that we are worried about then, what is the plan for dealing with water vapor? If we want to “do something” about the Green House Effect, we must abolish evaporation. Since that can’t be done, nothing significant can be done to stop the Green House effect, period.

Now mankind is not the only contributor to CO2 in the atmosphere.  Indeed, Peter Foster in the National Post mentions that humans contribute only about 1/20th of the CO2, and the rest is caused by nature.

Consider this: Let’s say that you, your wife and children are overspending by $100,000 per annum. She (H2O) overspends $95,000; your children (non-man-made emissions) overspend by $4750; you overspend by $250 (man-made emissions). You offer to cut your overspending by 50%– your family now overspends by $99,775. This won’t effect in the slightest your family’s budget woes. It is not a perfect analogy but at least it attempts to deal with the magnitude of the numbers. If man reduced his greenhouse emissions to nothing, the overall green house effect would change by completely insignificant numbers (less than 1/4 of one per cent). The more people that believe this hoax, the more I think we are entering into a kind of anti-intellectual age of anti-reason, a new Dark Ages. At very least, people are just not good at math anymore.

Imagine if a financial planner came to you and said, I have this really risky investment, a gold mine in Timbuktu. If you invest $100,000, you could lose everything. But the rewards are great and, if all goes well, you might just make $125 per annum. You would laugh at him, because you could bank the money at ING and make $1000 per annum with no risk of losing the $100,000.

This is a very simple math problem. Michael Crichton in his novel State of Fear suggests that if the problem were seen in terms of football field, man’s contribution would be one inch of 100 yards. He has developed the math much better than me; man’s contribution to the problem is about 1/3600; i.e., .028% vs. 99.972% caused by nature).

Note:  Foster wrote:  “During his CNN interview, Mr. Gore went through his usual parade of extreme weather factoids, technological wonkery and green stimulus fantasies, while spouting blatant untruths. Asked about the relative contribution of humans to atmospheric CO2 emissions, he claimed that they put up “the majority” (in fact, they are estimated to contribute about one-twentieth).”

The above article is based on comments I made at Craig Carter’s blog.

Keith McKinley made the following comment at Monty Pelerin’s blog  (emphasis mine):

John Stuart Mill’s 1861 [observed] that it was “required by first principals that the receipt of parish relief [welfare] should be a peremptory disqualification for the franchise.” Representation without taxation is every bit as evil as taxation without representation.

Dennis Gartman’s eighth rule of trading:  “Markets can remain illogical far longer than you or I can remain solvent” (quote attributed to J. M. Keynes)

This depends on the definition of the term “solvency”.  As a function of the solvency ratio, one must be pulling a profit at all times.  However, I assume that Gartman probably means something like this:

The financial ability to pay debts when they become due. The solvency of a company tells an investor whether a company can pay its debts.

The way Dennis Gartman-type trader would become insolvent is through a margin call that could not be met.  But Gartman says never to meet a margin call but rather liquidate positions.  But what if selling assets is insufficient?  The margin account could end up in a negative position and the trader becomes insolvent.  Gartman’s advice is good as far is it goes.  If a trader bets on a position using margin and leverage, he has to know when to leave the position before becoming insolvent.  Say you’ve shorted Berkshire Hathaway because you know that “idiot” is running that company to the ground:  when the irrational market keeps bidding that stupid company to the sky, you better get the heck out of that position before it bankrupts you.  That’s excellent advice.

But wouldn’t it be better to use leverage in a way that leadeth not unto insolvency?  So here is my alternate rule:

Thou shalt not use leverage unto insolvency

Lehman Brothers and Bear Stearns are the negative parables of times–investment banks so highly leveraged that they couldn’t withstand a downturn in the economy.  They had established debt-to-equity ratios of 30 or more to one.  A company or individual that keeps the debt to equity ratio at a more manageable level will not likely go bankrupt except during an Armageddon of deflationary meltdown, if the country loses a war on its own soil, or if communists come to power and seize all wealth.  Warren Stephens, in a Forbes interview, said that his investment bank only leveraged at 2-1, because he learned that one of the most important goals of business is to be in business tomorrow.  I am personally only comfortable with a debt-to-equity ratio of 1 or less.  Moreover, it is not a good idea to depend on available margin alone, unless that margin is extremely ample.  When the stock market crashes, margin credit also plummets.  Therefore, it is good to have a line of credit (e.g., HELOC) to fall back on.  Indeed, for the selling of puts covered by the margin, I immediately subtract the cost of assignment from the available line of credit, while reserving at least half of the line of credit for averaging down.  So it is ok in my opinion to use leverage; it just must be managed in a conservative manner. 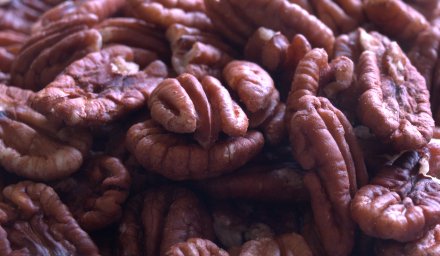 The US and other western countries including Canada, have devalued and are intentionally devaluing their currencies in a vain attempt to remain competitive in the world market.

China is now buying up pecans, about a quarter the North American production, causing the price to shoot up by about 50%.  The Globe and Mail reports:

China bought about 100 million pounds (45 million kg) of pecans in 2009. That was about one quarter of the total pecan crop in the U.S. and Mexico, the world’s largest producers. And it compares with less than 5 million pounds roughly five years ago. The strong demand has sent prices for some pecan varieties soaring to $6.50 (U.S.) a pound, from $4.25 in January, according to Mr. Zedan.

Imagine when China raises the value of yuan against the dollar.  When that happens all commodities will shoot up in price as there will be suddenly a billion consumers with significantly increased buying power.  Meanwhile, forget about those pecan and chocolate cookies we used to eat as kids.  That will become a luxury item.  Food is skyrocketing in price and the Federal Reserve calls this “deflation”.

What if we made nuts the bellweather of inflation?  They are certainly a better indicator than the CPI.

On this occasion of the renewed parity of the loonie with the US greenback, I want to publicly thank Ben Bernanke for the wonderful job he is doing as Chairman of the Federal Reserve.  Thank you for making it clear to the world that you want the US dollar to become worthless through low interest rates and quantitative easing.  I’ve been shorting the US dollar in favor of Canadian stocks in the oil and gas and gold mining sectors.  Here is new Ferengi rule of acquisition:  “Never let quantitative easing get in the way of profits.”