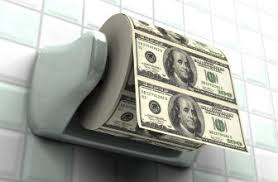 I continue my winning strategy of shorting the U.S. dollar.  Since about the summer of 2009, I devised a strategy whereby I use the available margin in my combined US/Canadian trading accounts to borrow US dollars to buy CDN oil & gas and mining companies.  This trade has been a consistent winner.  Then in the Spring of 2010, I started to sell option puts on ABX, GG, NGD, PWE, PGH, ERF–Canadian companies which trade in the US stock exchanges and options markets.  This trade has been consistently profitable as well.  Indeed, I’ve only had two assignments on the US side, and within a week in each case, I was able to trade out of the assignment (with a small profit) and to sell another put on the same position.  As of today, puts in the Canadian market have been a net losing venture (on paper) and I still  own assignments in PBN, PBG, and DAY.  But it is just a matter of time before these companies recover.  Selling the puts has given me downside protection which I don’t have in my junior oil exposure or in my long positions that have gone south (e.g., TOL, PMT).

Questrade has made it easier for me to implement my strategy as a DIY investor, because their platform, unlike TD Waterhouse, gives the DIY investor direct access to OTC (over the counter) markets in the US.  With Waterhouse, I had to call the trade in, and while they gave me the discount brokerage commission rate, I could not change a bid in mid-stream without also calling them.  So, for example, I was able to use today my available margin to buy CDN equities in US dollars directly–and the OTC markets give me access to the companies too small to be listed on the New York stock exchanges.  Today, I bought LSG/LSGGF (Lake Shore Gold) at US $2.25, which has a NAV and book value now exceeding its share price.  They are having current production issues.  Raymond Brown downgraded it yesterday, but still considers it to have a one year target price of $3.40.

Let’s just face it.  The US dollar is a failed currency.  It’s buying power must wane because in three short years, Ben Bernanke has created 3x the adjusted money base.  It is now only a matter of time before the dollar dies.  I doubt that anything can be done to save it now, even if Congress were to balance the budget.  But balancing the budget won’t be enough.  They would have to go and arrest Ben Bernanke and replace this tired out Keynesian with an Austrian, because nothing will stop him from creating more money out of nothing.  Sure, keep the debt ceiling where it is and Bernanke will simply monetize the old debt as it turns over.  Almost a half trillion dollars of debt will come due by the end of August, and Bernanke has been buying 70% US debt in the last few months.  Where is the US going to find buyers for this debt now?  Furthermore, nothing will stop Bernanke from buying the debt owed to the Social Security Trust Fund so that Obama can continue his spending spree.

The Canadian Loonie is climbing against US dollar.  It reached $1.06 today.  And this is not because it is a good currency; it is a terrible currency with the Bank of Canada holding interest rates below what is reasonable.  This has caused a housing bubble in Canada.  But the Canadian debt to GDP (30% acc. to the link) is much lower than in the US, which stands 350% according to the following chart (supplied by Lacy Hunt, Hoisington Asset Management):

Now we are hearing rumours that there is a debt deal between Boehner and Obama which will really disappoint a lot of hard-working Americans with savings:  3 trillion in spending cuts over 10 years for a 2.5 trillion ceiling raise.  When hyperinflation takes over and the dollar sinks to nothing, hopefully then, there will be some responsible adults who can take over the government of the United States.  Now it’s being run by children and criminals.

Ultimately, to do well in investing you have to own what the people who have money want. The creditors have told the world explicitly that they don’t want US dollars any more (and that’s why Bernanke is buying 70% of US debt)–though they continue to prop up the dollar,  biding their time so that they may exit this trade with the least damage to themselves; what they really want are hard assets: oil, gold, silver, rare earths, food and all other commodities. That’s why I am long physical gold and silver (Sprott Physical Gold and Silver Trusts) and Canadian oil & gas and gold mining.  This is how the Chinese are investing, you know the people with the largest currency reserves in the world that I am aware of.  What are they buying?  The Chinese are sinking another 2.1 billion into Canadian oil.

Meanwhile the American consumer is using his credit card to buy staples.  When that’s no longer possible, many people will be facing starvation.  Don’t look to the government for help because all they will be able to do is hand out debit cards (the new food stamps) filled with worthless dollars or welfare cheques likewise denominated in worthless dollars.

Ron Paul should have asked Bernanke if the US dollar was money.  If Bernanke had said it isn’t, he would finally show some understanding about economics.