Blogging has been a great help to DIY investors.  They can formulate their own strategies in writing, see what works, and share their knowledge with others.  Bloggers often have skin in the game; it might not be very much skin, as many are not rich people, but they are real investors and not like young journalists who don’t really have much hands on experience with trading or owning anything more elaborate than index or mutual funds in their RRSP accounts.

One of the clear reasons for thinking that many financial journalists are not particularly knowledgable about investing is that they are always engaging the advice of “experts” who are wrong most of the time.  Blogger Devon Shire is hypercritical of Robert Prechter, whose predictions are often dead wrong.  Another famous talking head is Dennis Gartman, whose own fund, HAG.TO, has remained essentially static since the fund began in 2009 while the stock indexes have greatly improved.  So why is this guy on TV?  He’s doing worse than an ING Direct savings account, where at least your money gets 1.5% interest.  The original investors of his HAG’s IPO at $10.00 are still 35 cents below water.  In the meantime, the Dow Jones and the TSX are both up about 60%.  How can a fund lose money in these conditions?  Why does Dennis Gartman get on TV and why do so many financial advisers read his famous Gartman Letter?  I think it may be because the journalists and the advisors are themselves incompetent.  At least all the many sheep following Warren Buffet around can say he is the best investor of all time.  A proven track record is actually a sign of competence.  But what proves that Gartman or Prechter know what they are talking about?

Bloggers, who have skin in the game and gain experience as they go, thus contrast with financial journalists.  Consider the Financial Post’s John Shmuel has a column with the title, “Lofty loonie spells buy opportunity”; but just a few weeks ago, he’s done columns on why Canadian stocks will outperform.  So why would he change his mind?–Or does he even see the contradiction? Well, as a journalist, he’s not actually trying to present a coherent strategy but information as it comes to him.  So I find that journalists can be great sources of information but terrible sources for eking out an investment strategy.  Why does Shmuel think that the lofty loonie spells a buying opportunity for US equities?  It seems for no better reason than that loonie is at a three year high.

Well, I did a few blogs about how and why I short the US dollar by using leverage in my US margin account to buy Canadian gold mining or oil and gas companies (e.g., abx, gg, erf, pwe, pgh).  The dividends from the oil and gas companies cover the interest charges and some.  Later, I added the selling of put options on the same equities, and reduced my overall cost of carry, because the leverage is now pushed off to some time in the future and I don’t actually have to pay interest on it today.  Has this strategy worked?  Extremely well.  Now that the loonie is at a three year high, will I now go long on the greenback or US equities as Shmuel’s article advises?  I don’t think so.  Consider the following chart (source Yahoo! Finance, straight line is mine): 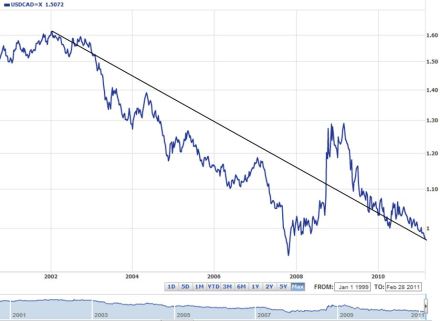 What we see is that the loonie hit a low of $1.61 in 2002 and has basically improved in a nine year trend against a dollar.  Once the extremes of 2008-2009 are removed, a secular trend emerges which would suggest that the greenback will continue to move down against the loonie unless the fundamentals that caused this trend are changed.  If we looked at gold or oil against the dollar, we will see the same trend.  What we are seeing in the chart is US dollar inflation.  Not that the loonie is much better, but what happens in periods of inflation is that the cost of commodities rise.  Since the Canadian dollar depends so much on commodities, then whither commodities so the loonie.  If the price of commodities is increased by the inflation of the US dollar, can we expect this trend to reverse?  I think so if any of the following events were to happen:

(2) If Stephen Harper announces a deficit budget in the order of 150 billion or more (its is currently projected at 45.4 billion).

(3) If the US Congress makes serious cuts or attempts to balance the US federal budget.

(4) If the Chinese and other foreign investors decide to abandon Canada.

Let’s discuss each of these issues:

(1) If Bernanke gives up QE. I fully expect him to announce QE 3 in the next few months.  If he doesn’t continue to implement QE then the US government will have to make serious cuts of a trillion or so dollars from its current spending.

(2) If Stephen Harper announced a deficit budget in the order of 150 billion or more.  The Canadian population is about 1/10th that of the USA.  Therefore, the Canadian deficit would have to reach 150 billion in order to match the magnitude of the US deficits of 1.5 trillion.  I don’t see this happening under Harper’s watch.  In fact the trend is that the deficit is dropping in Canada.

(3) If the US Congress makes serious cuts or attempts to balance the US federal budget. This won’t happen until a cost cutting president gets elected.  It may actually never happen.  But the new Republican House is arguing over small cuts which won’t make any difference in a 1.5 trillion or so deficit.  Cut a few hundred billion out of that, and you are still over $1 trillion.

(4) If the Chinese and other foreign investors decide to abandon Canada. Right now, China, Korea, Thailand, Japan are all pouring money into Canadian resources.  Heck, foreigners are even buying our sovereign debt.  I see this trend continuing, as Canada has what these economies need, commodities.

The economy in the US is bad.  I’ve lost money in the US in a bad real estate deal started in 2008.  You won’t see me fall into that trap again unless the secular trends change.  My feeling is that my reasons for shorting the US dollar haven’t changed because the loonie has improved to $1.03 US.  This is a sign of secular trend not a buying opportunity for US stocks.

And if you ask me why I expatriated from the US?  I’ll tell you now that it’s so that at least one of my dad’s four children will still be able to take care of him in his old age.

Update:  Why pick on the Financial Post and John Shmuel?  David Berman has a similar article at the Globe & Mail: “Bruised greenback an opportunity for Canadian investors.”  Like Shmuel, he makes it clear that the US dollar is at a low but doesn’t seem to deal with any of the secular trends that put it there and then irrationally states:

It seems likely that the worst of the freefalling is over, given that the factors that drove the dollar down – including massive deficits and stimulative monetary policies – will probably move in reverse as the economy improves.

But he provides no actual proof that the US economy is improving.  That’s just baseless optimism as far as I can see.  Personally, I doubt that the damage of the QE that Bernanke’s already done has run its course.  Some inflationistas believe that when the economy actually improves, that’s when we will see the full effect of monetary inflation, because then velocity and credit will also expand.

4 thoughts on “Is it time to buy US? I. Studying the fundamentals”